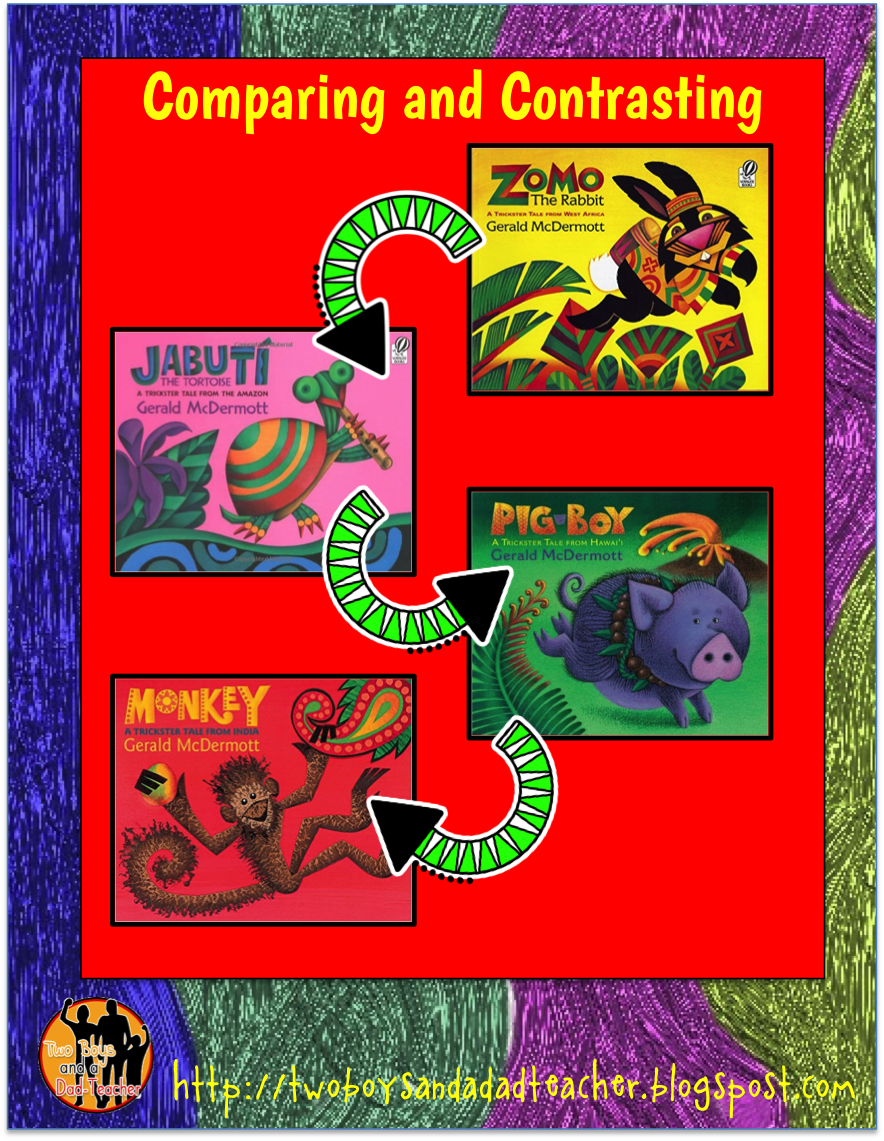 As you may have read in an earlier post, Gerald McDermott is one of my favorite and go to authors to use for read alouds and for teaching.  He has a huge collection of diverse stories from many cultures that are aimed at children in grades K – 3 that are all beautifully illustrated.  With his stories, I have taught every single Common Core State Standard in Literature for grade 3.

I am currently focusing on RL.3.9 which states:
Compare and contrast the themes, settings, and plots of stories written by the same author about the same or similar characters (e.g., in books from a series).


That’s a doozy of a standard!  To begin with, in my class, I have many students who just don’t have the vocabulary or grammar to compose a sentence that compares or contrast.  So I must explicitly teach using sentence frames.  Secondly, most teachers when they see this standard immediately think of chapter books like Harry Potter or Ramona Quimby.  Yes, you can certainly use those wonderful books to teach this standard.  But when you are limited in time, chapter books do not make sense.  Luckily, with McDermott books, you can easily use one per day to teach this standard.  And that’s exactly what I did.

I had already used Raven by McDermott back when I was teaching the folktale unit so the students were already very familiar with that story.  I then introduced Zomo the Rabbit, a wonderful tale from West Africa.  We had a classroom rug discussion after the read aloud about what was similar and what was different.  I had the students pair-share as well as, discussing in whole group.  From there the students were ready to fill out a chart I created in which they had to describe or name the setting, identify the major character and three traits, and explain the problem the major character had.


You might be wondering why I didn’t use a Venn Diagram.  I will be having them transition to a Venn Diagram soon.  But first, I wanted to make sure that the students were comparing EXACTLY what the standard stated:  settings, plots and characters (I left out theme because I have not taught that explicitly yet, though we have learned to identify the moral or lesson or central message — BUT there is still confusion if that is the same as “theme” or not.  I know that TEACHERS know the difference, but I don’t think the authors of the SBAC do as they seem to use central message and theme interchangeably).


In any case, once that was done, we used the chart again to pair-share what we noticed was similar or different in each story.  I believe it’s always important to give the students that opportunity to practice orally before writing down information because we all know that proficiency in oral language leads to proficiency in written language.

The first few times we used these frames, I guided them through the process.  Once they were familiar with the entire process, I then had them do the comparing and contrasting independently.

Next week, I will do some more comparing and contrasting but using a Venn Diagram.  The first time I will show them how to compare and contrast the same exact things:  setting, plot and characters.  Then, they will do the same but independently using two other of Gerald McDermott’s books:  The Magic Tree and Arrow to the Sun.