Let’s face it, fractions are hard.  And it is very hard for 8 year olds to conceptually see fraction sizes to compare them.  So what’s a teacher to do?  Bring out the manipulatives! 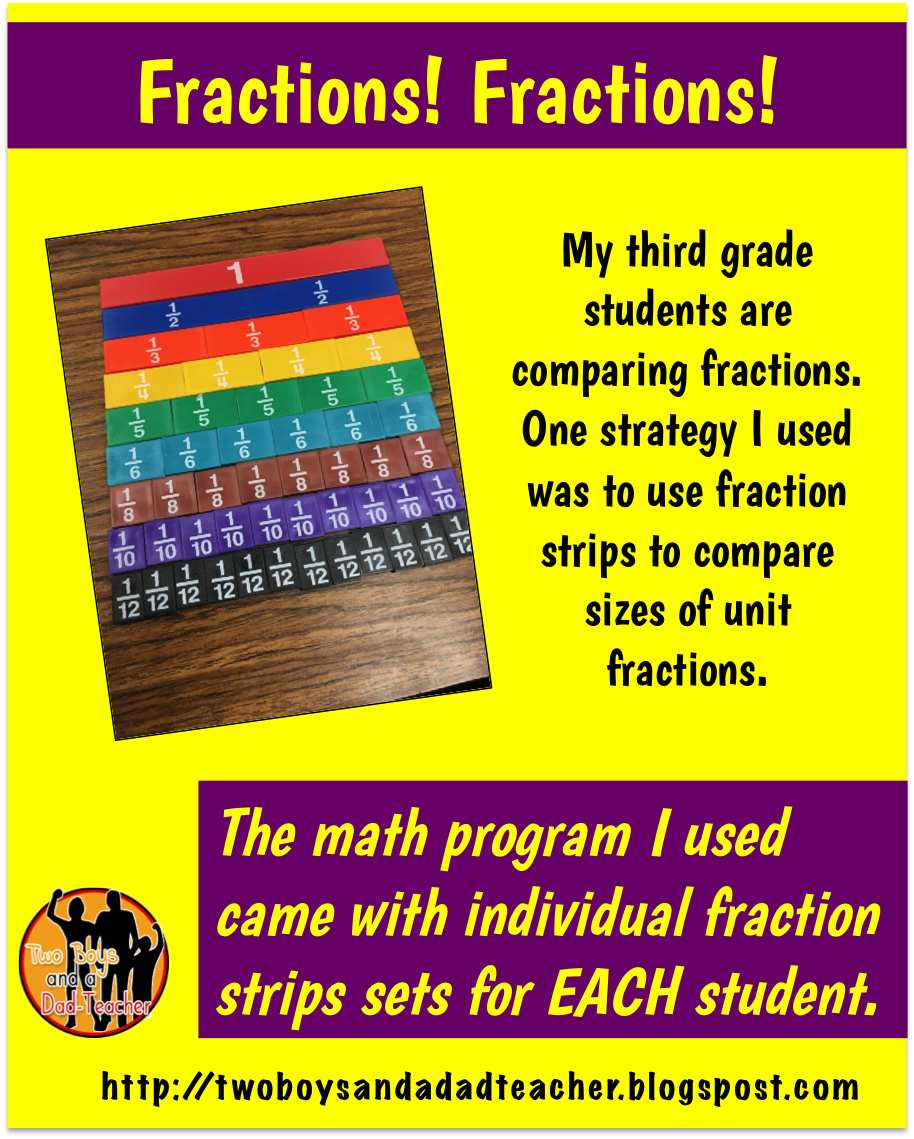 I am fortunate that the math program my district uses came with many, many class sets of manipulatives.  We used the fraction strips to build all the fractions equal to a whole.  And there they are.  Fraction sizes all lined up and easy to compare.

But wait!  Third graders make some very interesting mistakes when comparing using fraction strips.  Some did not line up the fractions strips on the left side to compare. Instead they kind of centered each strip one over the other.  Another mistake was to put the fractions strips side by side instead of one above the other aligned to the left.  Finally, another mistake I saw was students stacking the strips to see which was taller.  Interesting but not going to work! 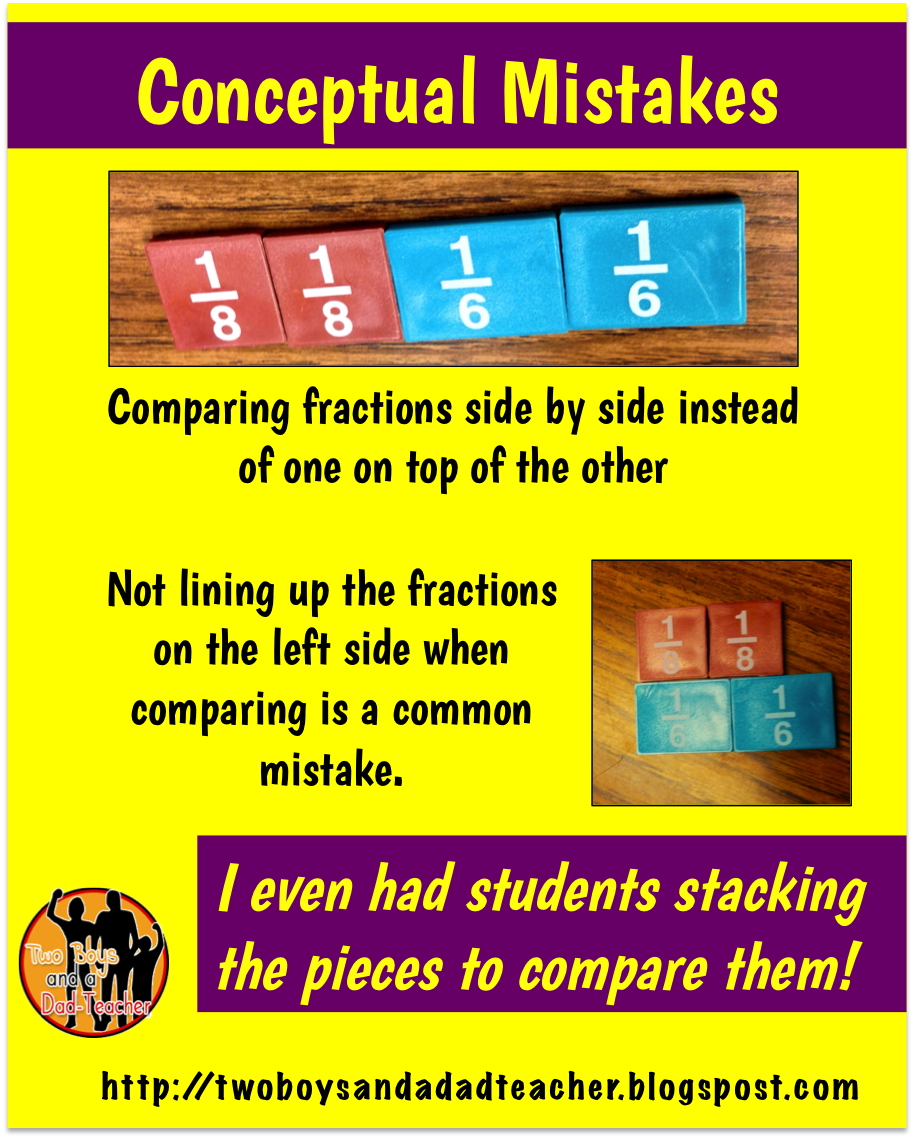 Once those mistakes were fixed, we practiced building fractions using the manipulatives and comparing which was larger or smaller.  Then the next day, it was time to compare fractions with the same denominator.

I was lucky to find this wonderful FREE resource by Laura Candler in her TpT store.  You can find it HERE.  The day before using them, I made the copies of the cards, laminated them, cut them and put them in baggies.  I had students pair up with each baggie. 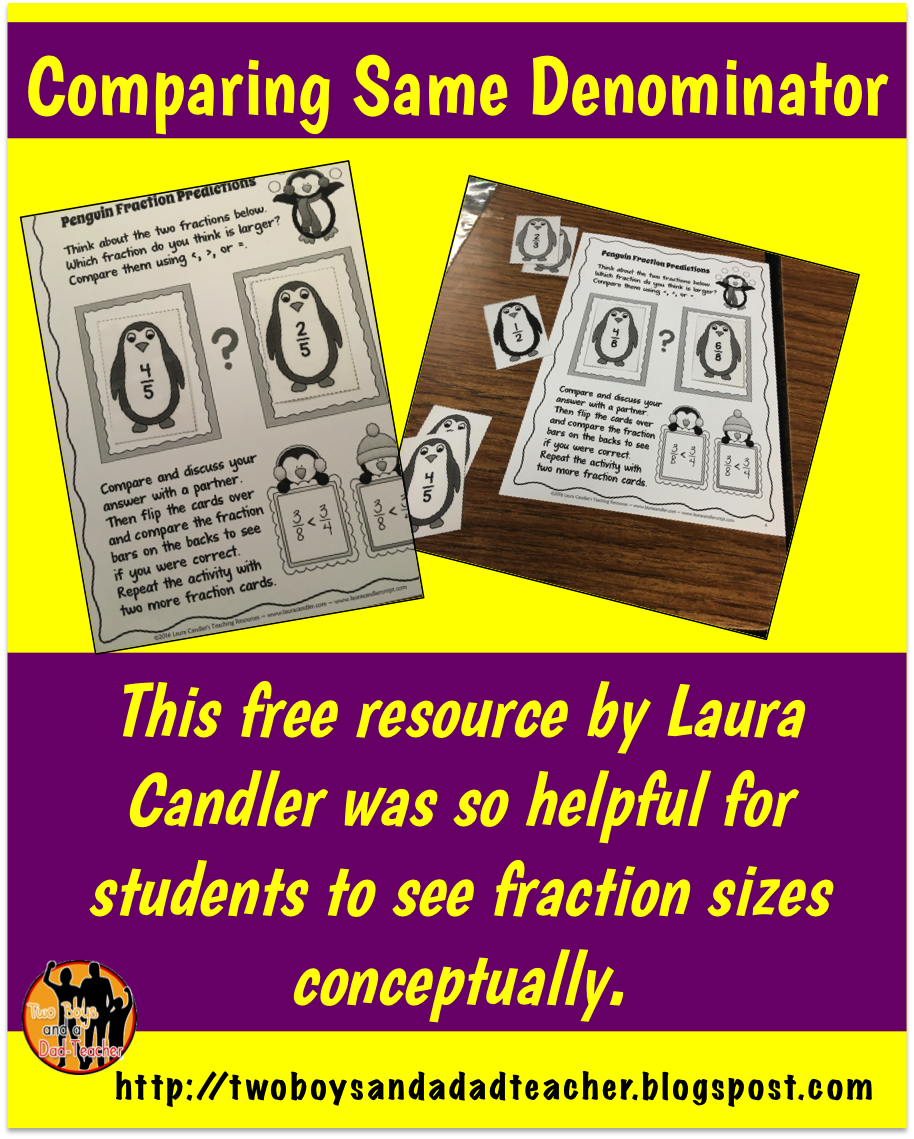 First I had the students sort the cards by denominator.  Then each pair numbered off A and B.  I then asked the students to find 2 cards (1/3 and 2/3 for example).  They put the cards on the mat.  Then I asked A to explain to B which fraction they thought was greater.  B had to listen to repeat exactly what A said.  Then it was B’s turn to repeat what A said and to agree or disagree and give reasons why.  Lots of math talk went on in just those 4- 5 minutes! 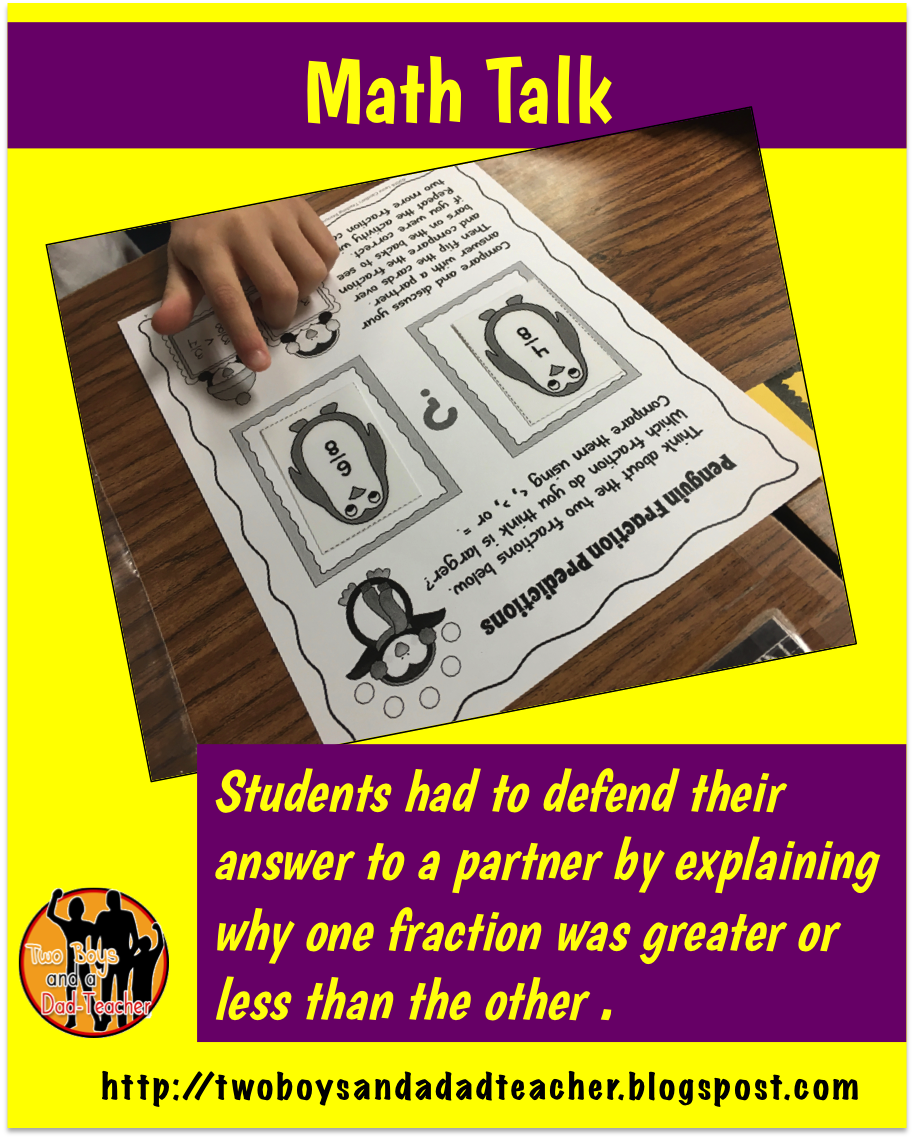 Then I had pairs raise their hands if both A and B agreed on which was the greater fraction.  A majority of them did agree with their partner.  For the 3 pairs that did not agree, I asked them why?  By doing that,  I quickly found out the student’s thinking about how they were comparing the fractions.  We talked about what would help them clear up the disagreement.  I guided the discussion to using fraction models (like the day before with the fraction strips).  With Laura’s resource, all the students had to do was flip the fraction card over to see the models!  Then they could visually distinguish which fraction was larger.  We also talked about how the fractions had the same denominator so that without a model, we could just look at the numerator to figure out which was greater. 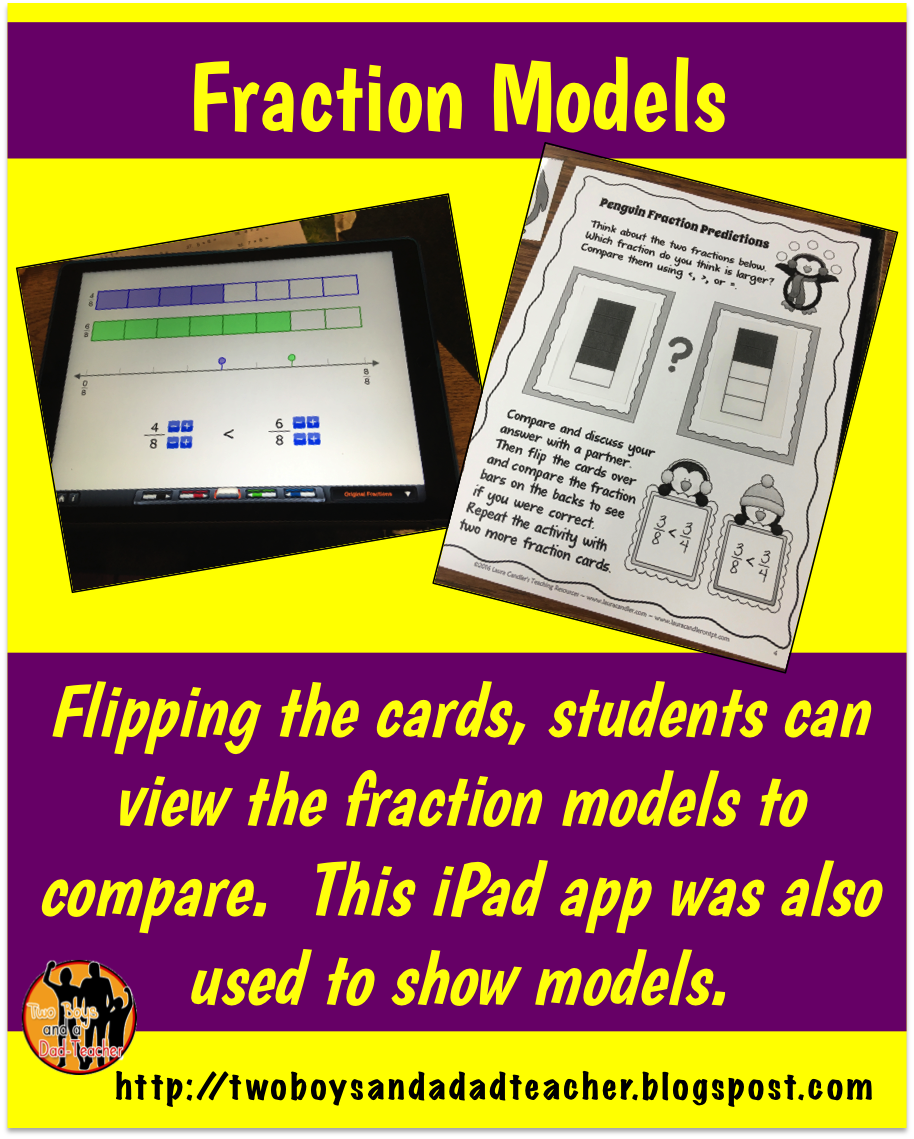 This resource is very much worth downloading and using with your class. It’s simple to use, but powerful!  We continued to practice a few more times with the cards before moving to a paper and pencil task of shading in fractions, then comparing them with math symbols < > = .

I plan on using the same resource cards again for the next lesson which involves comparing fractions with the same numerator but different denominator.  We’ll tame those fractions soon enough! 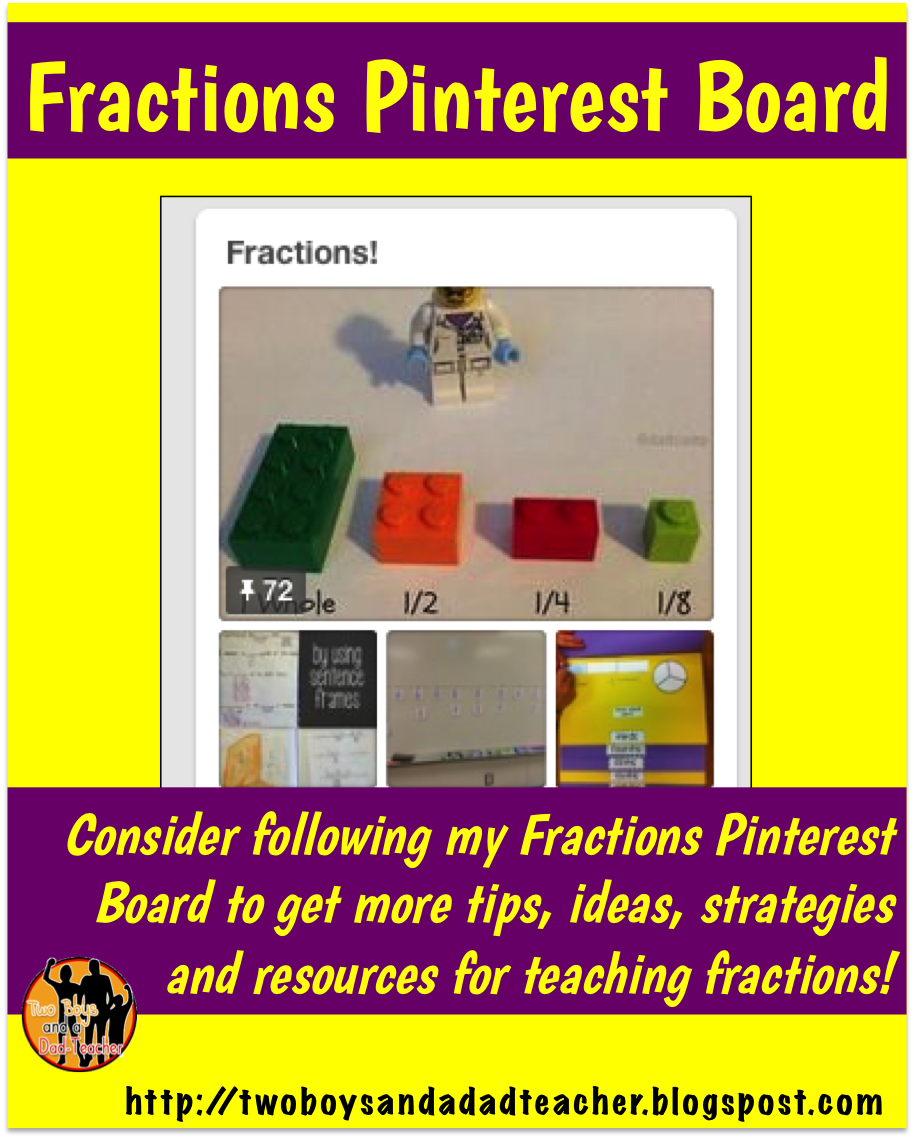 You might consider following my Fractions Pinterest Board.  I continuously curate with great pins for ideas, tips, strategies and resources for teaching fractions.