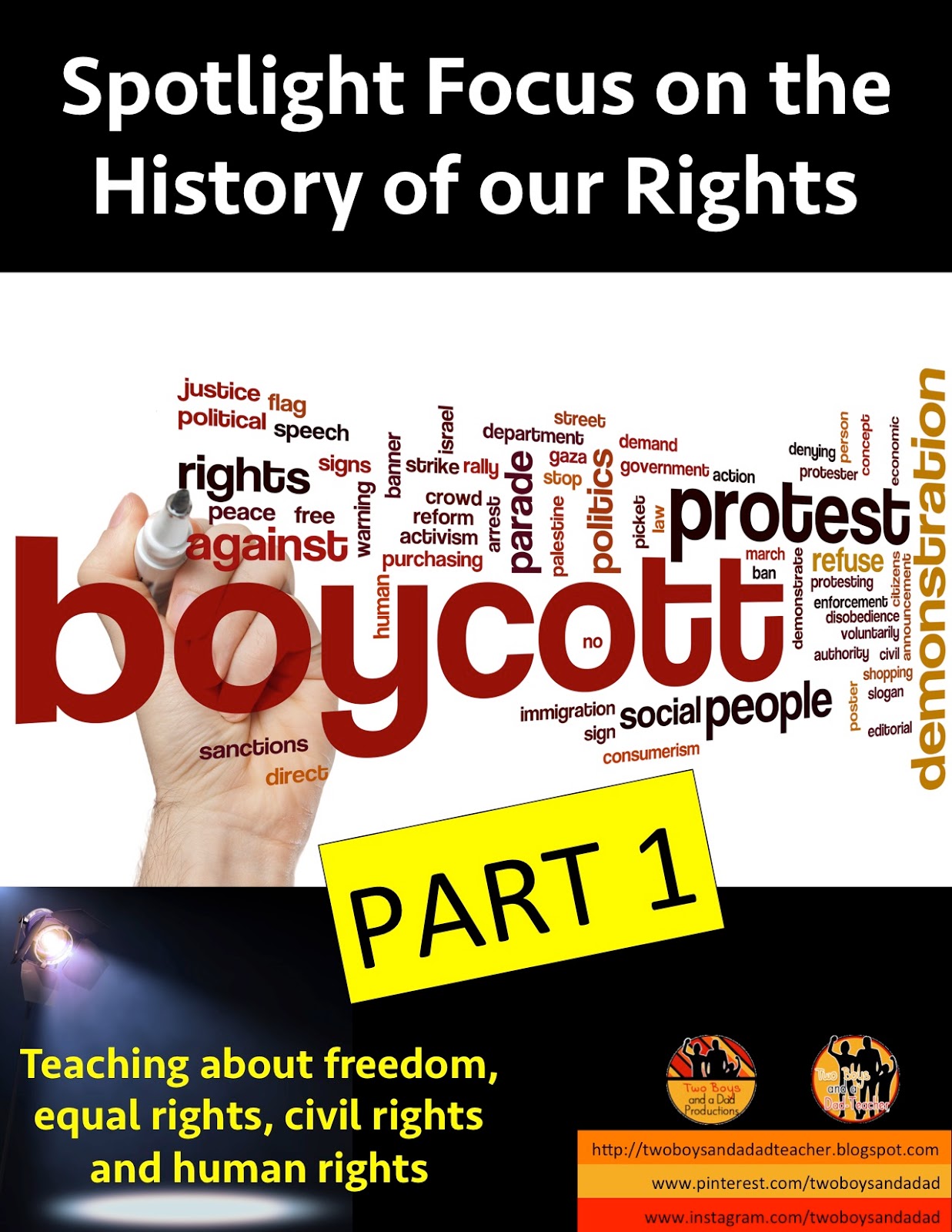 If there is one thing an 8 or 9 year old knows for sure is this:  what’s fair and what’s not fair.  That’s a great starting point to teach elementary kids about the history of fighting for freedom, equal rights, civil rights and human rights.  Sure, it’s a heavy topic and full of controversy.  But, it needs to be taught so that students, even at this age, appreciate all the sacrifices others have made for them.  Without those who fought for freedom, fought for equality, fought for access to education, voting and jobs, they might not be sitting in your classroom right now receiving an education.

I feel it is very important to teach history in order.  Unfortunately, the social studies text my district uses thinks otherwise.  So I have developed units that start from the initial inhabitants of North America, the Native Americans, all the way to the Civil Rights Movement.  But starting from the unit on the American Revolution, students start learning about the sacrifices people made to start a new form of government and country.

But I also let them know, after it was created, it was not perfect.  The new Constitution regulated African-Americans to slavery, women were forgotten (even though Abigail Adams reminded her husband, John Adams, to “not forget the ladies”), and Native Americans were continued to be ignored as citizens or as people.  This was all unfortunate because for the next 250 years, we’ve had to fight wars and each other to correct those inadequacies.

FIGHTING FOR FREEDOM FROM SLAVERY 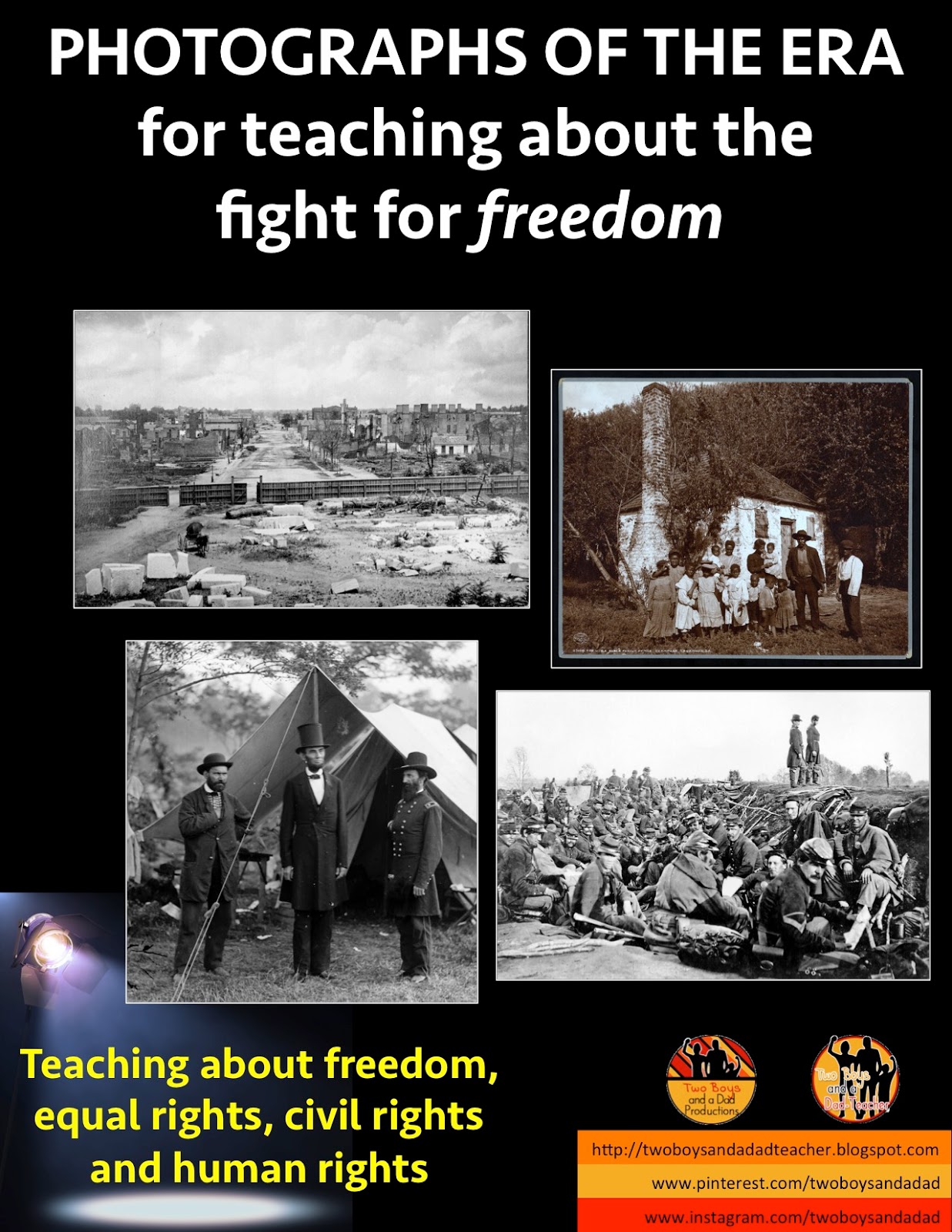 When teaching about the Civil War, I remind students that even though many of the Founding Fathers denounced slavery, some of them owned slaves!  Slavery in the Constitution was a compromise that had to be reached in order to form this new country.  But that compromise came back to haunt us with the start of the Civil War.

But for now, let’s focus on the people involved:  Abraham Lincoln, Harriet Tubman and Frederick Douglass.  Why these people?  One had the power to end slavery, one was a slave and the other fought for the abolition of slavery.  Let’s face it:  the Civil War was about slavery.

Here are some great books I use to ground the students in the time and who these people really were: 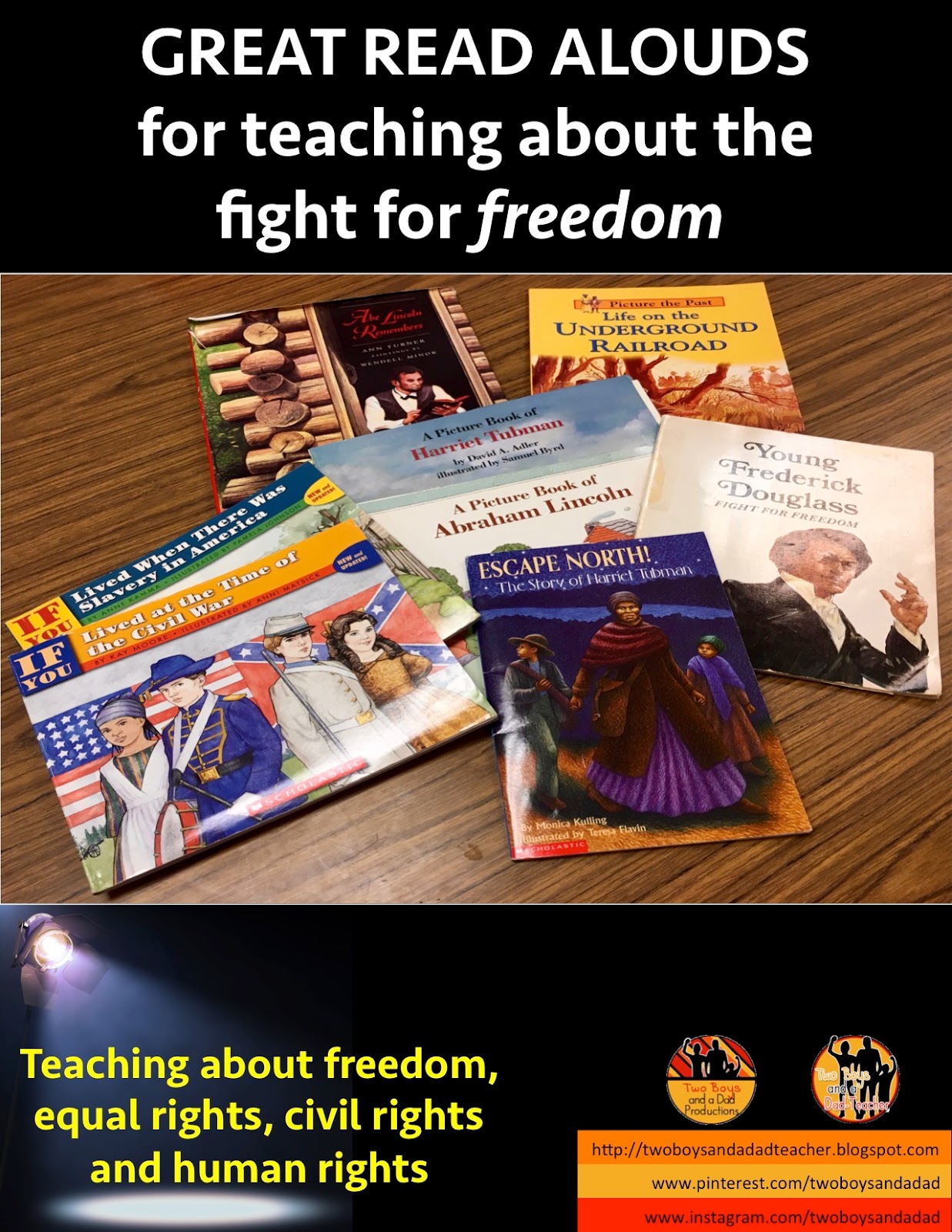 My favorite of the books is Life on the Underground Railroad by Sally Senzel Isaacs.  It is a non-fiction book with wonderful illustrations, maps and pictures.  The three individuals I chose all played important roles during the Civil War.  Another thing, I do not sugar coat slavery.  I show them actual photographs of slaves (by this time, the camera was in use and we have thousands of black and white photographs), the fighting and of the people involved.

I remember as a kid, watching the mini-series Roots during the 70s.  That show made a great impact on me and all my peers at the time. There was no sugar coating of how Africans were being treated.  I’m not saying, we need to be graphic with such young students, but at the same time we need to be truthful about what happened.  Even though the Civil War ended slavery, it did not erase prejudice, hate and fear.  That would be another battle to fight during the Civil Rights movement.

Now, let’s not “forget the ladies” as Abigail Adams once said to her husband, John Adams.  I do not have daughters but sons; however, I can see huge differences in my girl students of today as opposed to 30 years ago when I started teaching.  Today, when I tell girls that 100 years ago, they’d probably end up being married and having 8 kids they are shocked.  Many of them want to be teachers, doctors, police officers, etc.  They (including the boys!) need to be taught how history has treated women in the past so they can appreciate what is offered to them today. 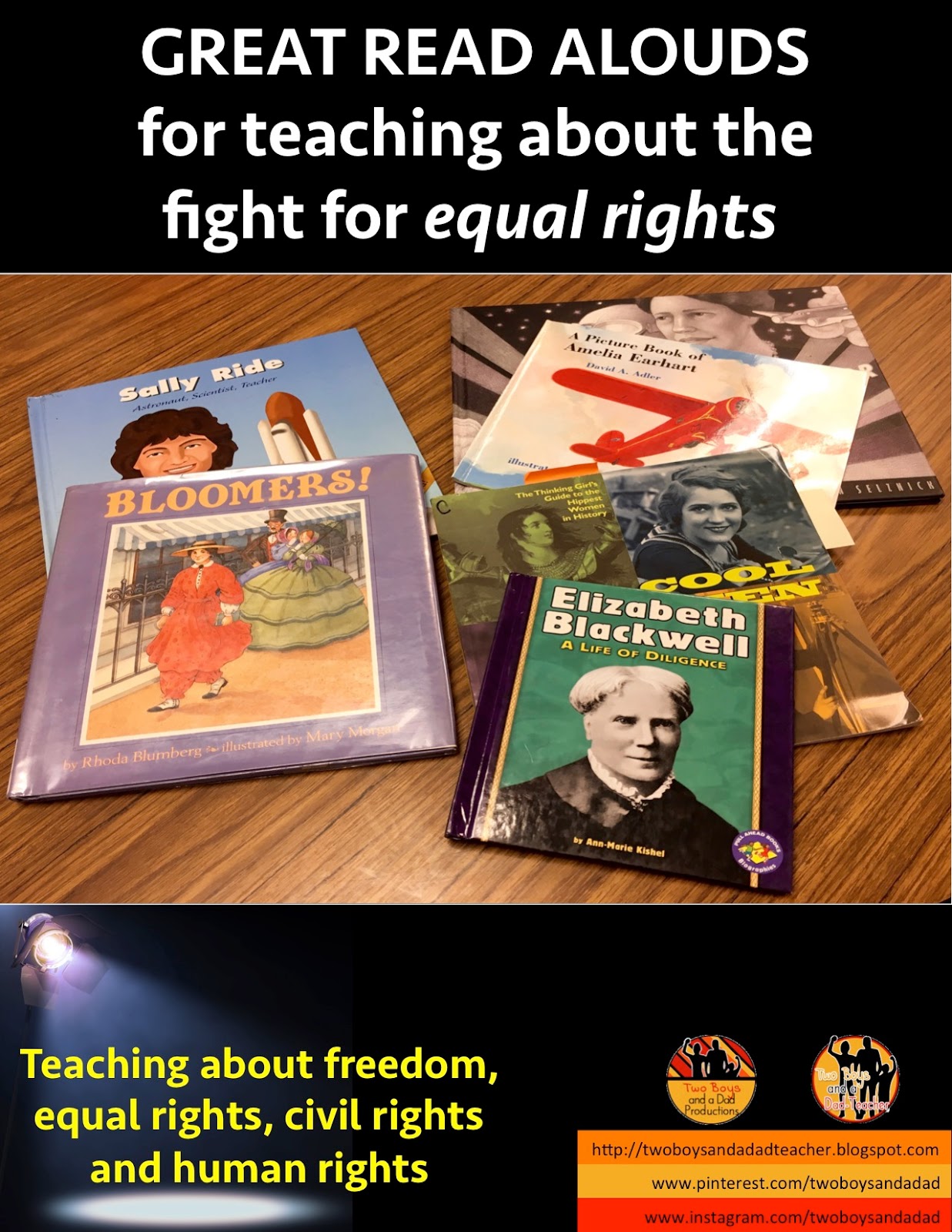 My favorite book to start out with is Bloomers by Rhoda Blumberg.  It’s a great story of how women were expected to dress in a certain way, even though, it was cumbersome and even dangerous!

It also gives an insight into how “shocking” the behavior was at the time for a woman to wear pants, speak in public, travel alone, speak out for voting, etc.  Of course, the boys think it’s all funny…until I tell them if we were still thinking this way about women, that means their MOTHERS, GRANDMOTHERS, AUNTS, SISTERS, COUSINS, ETC., would also be treated that way.  Then they change their tune.

There are so many resources available (some of which I have provided below as links) because by now the motion picture camera had been invented and we have actual film of women marching, protesting and being arrested.  Not to mention the thousands of photographs of the time as well.  I also don’t sugar coat the fact that many of these brave women were arrested, beaten and some would say, tortured.  There is this very good YouTube video available that intersperses real life film footage with clips from a movie made about the suffragettes:  Alice Paul Women’s Suffrage. 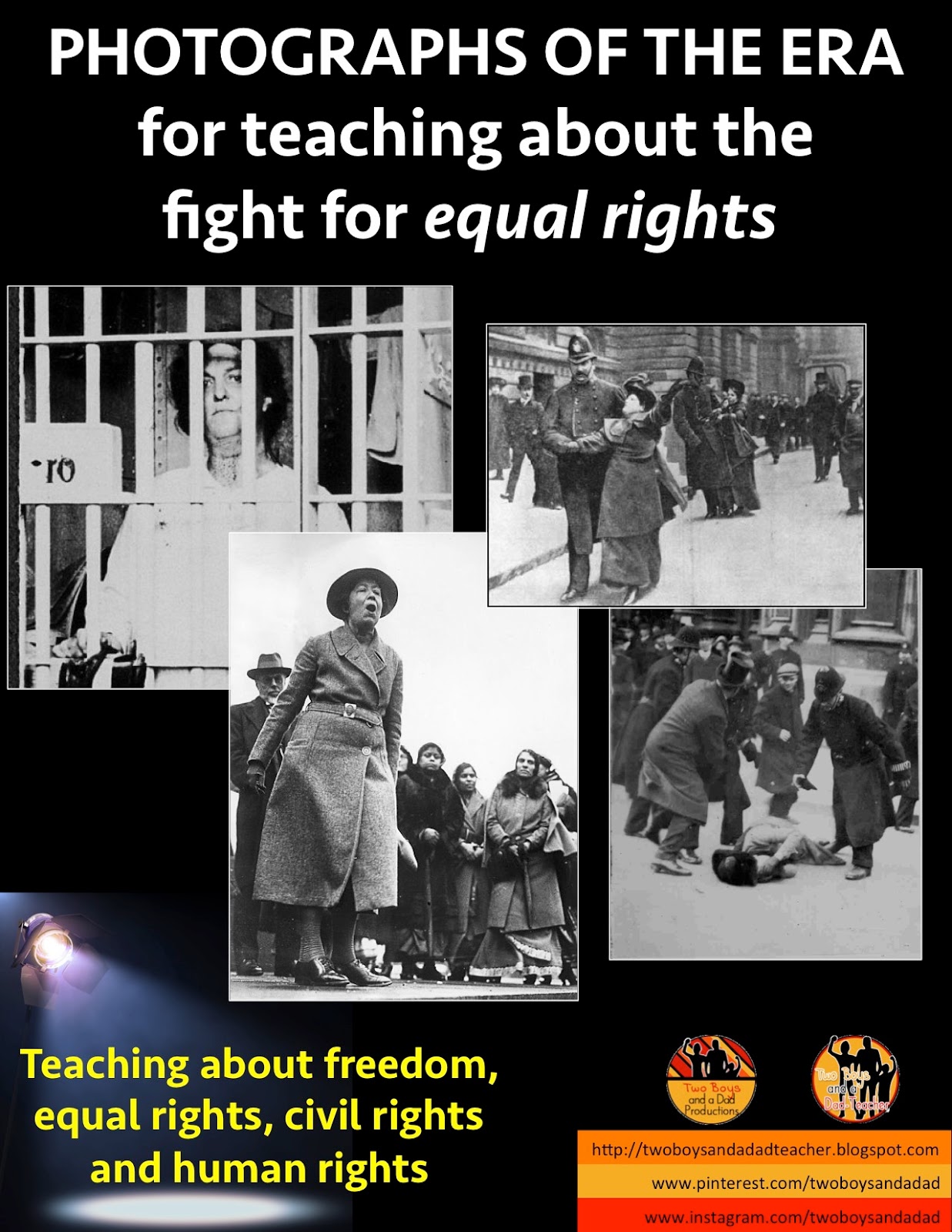 Of course we learn about the pioneers in women’s rights such as:  Susan B. Anthony and Elizabeth Cady-Stanton (voting rights), Elizabeth Blackwell (first female physician in the US), Amelia Earhart (aviation pioneer who proved the woman were equal to the task), and Sally Ride (first US female astronaut…who wouldn’t have been able to be an astronaut had it not been for all these pioneering women!).  Some of the links provided are to one of my favorite sites for students to use:  www.ducksters.com.

But my favorite to share is from a book called Cool Women by Dawn Chipman.  As the title indicates, there are lots of cool women in this book, including the women of the All-American Girls Professional Baseball League (yes, the same one from the movie A League of Their Own).  How ridiculous was it for women to play baseball in a skirt, make up and loose hair style?  I show them selected clips from the movie (especially the induction ceremony to the Baseball Hall of Fame).

Did you know that even after the 19th Amendment granting women the right to vote was passed, women could STILL not have their own credit card…not until 1974!  Again, this goes back to being able to change laws and even the Constitution but it takes time to change people’s thinking and attitudes.  That brings us to the next big battle:  the fight for Civil Rights.

Though the Civil War ended slavery, it did not change beliefs and attitudes, especially in the South.  We all know that the slaves were made citizens, but did not enjoy all the rights of being citizens.  Most students by this age already know all about Martin Luther King, Jr. and his I Have a Dream speech.  But what was he really fighting for?

Here are some great stories I use with my students to teach about the Civil Rights Movement: 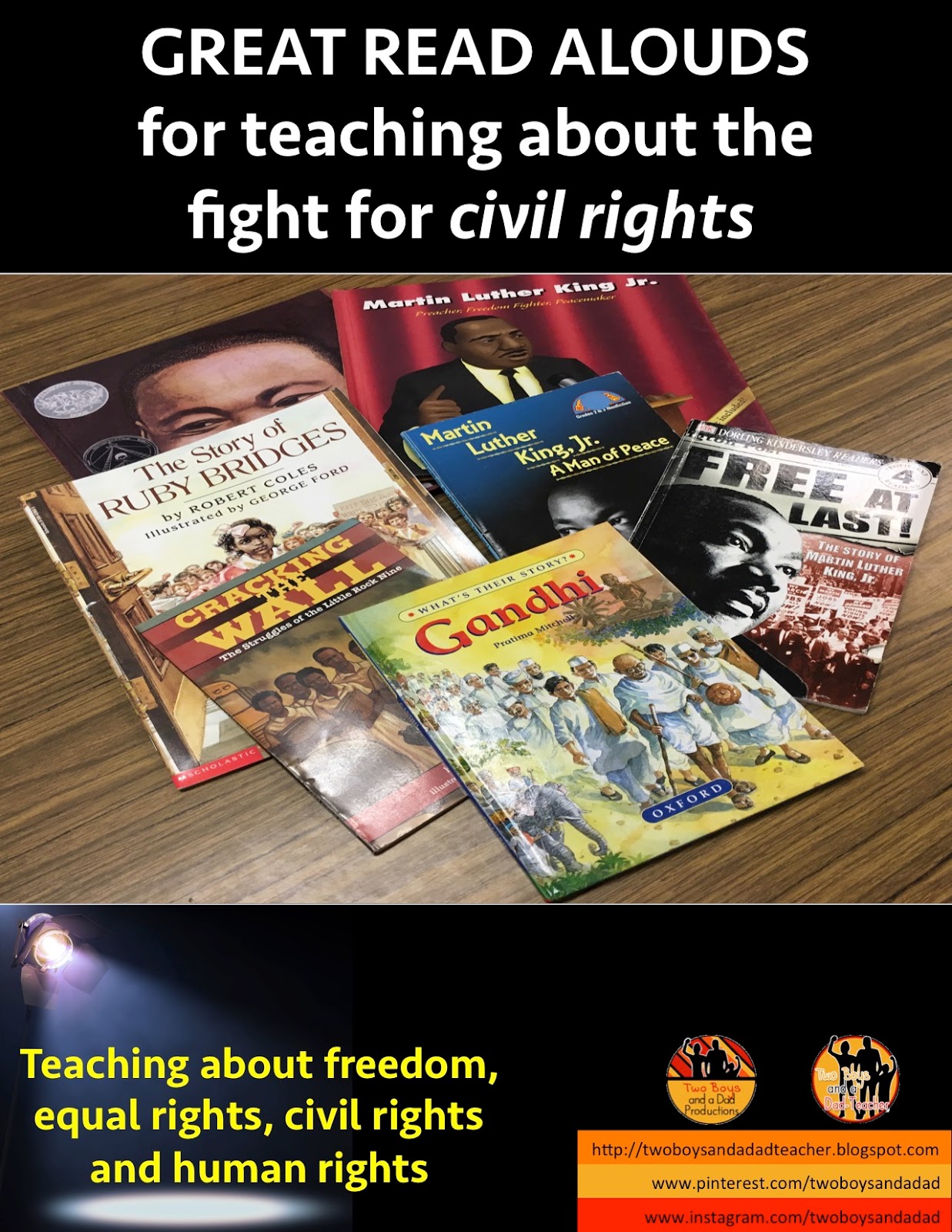 My favorite one to read is Cracking the Wall:  The Struggles of the Little Rock Nine by Eileen Lucas. I have found videos to go along with the story that make it real and make it come alive for the students.  You can see the video HERE.  The Little Rock Nine were also featured on Oprah.  It’s so interesting to see their expressions when a story book with color illustrations turns into real life when they see the actual TV coverage of the time.

Another wonderful resource I have found and is very effective because of the amazing photographs included, is this big book by J. C. Reed: 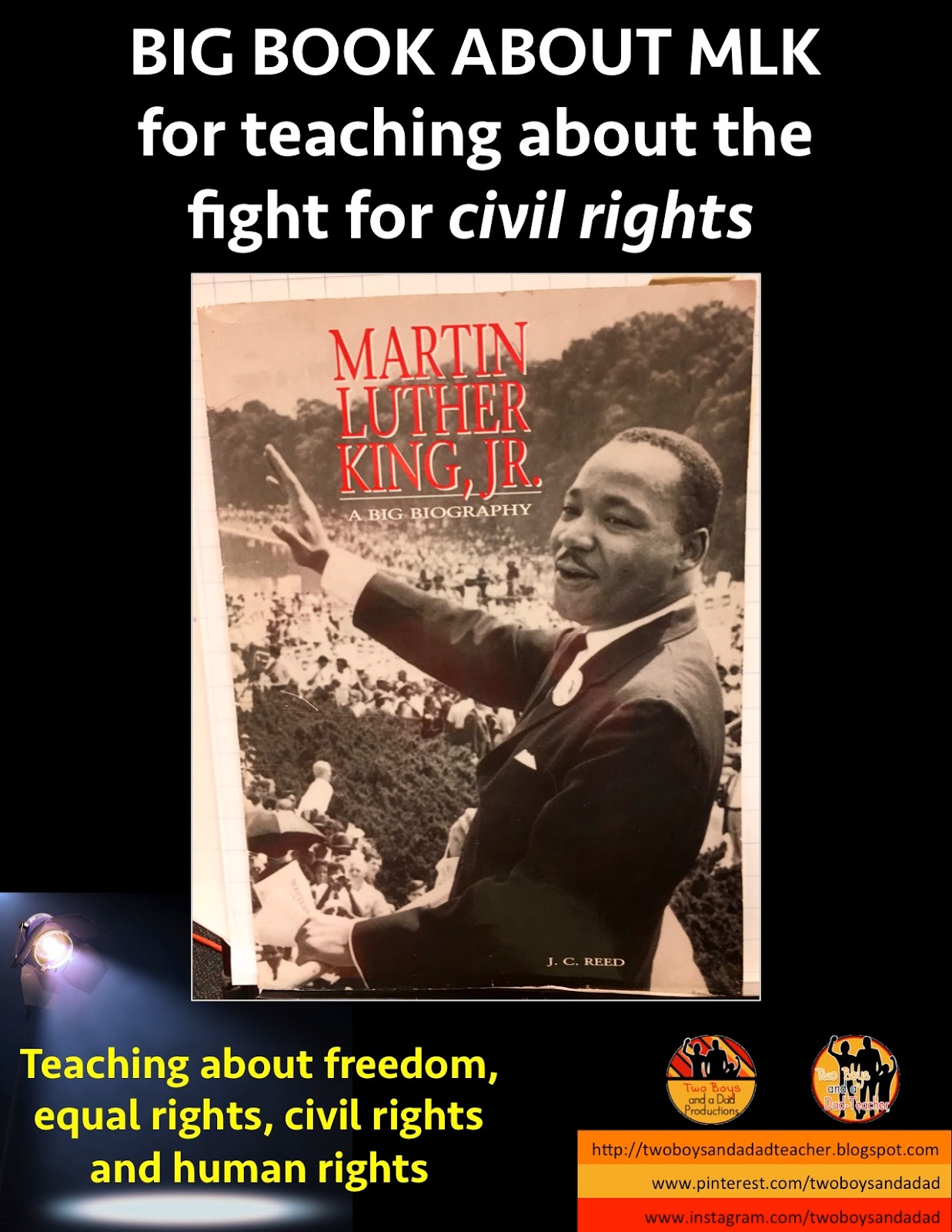 Here are some examples of the pictures used: 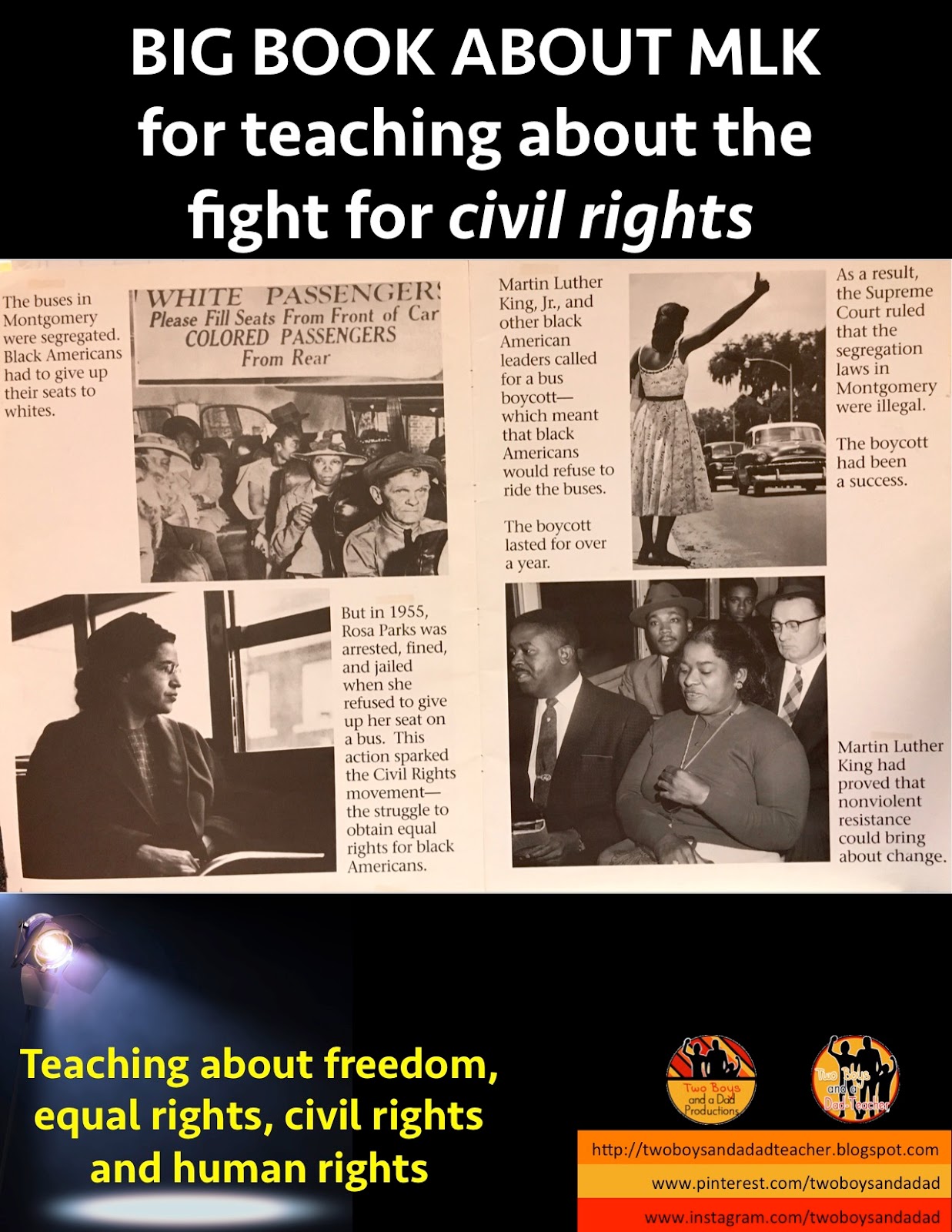 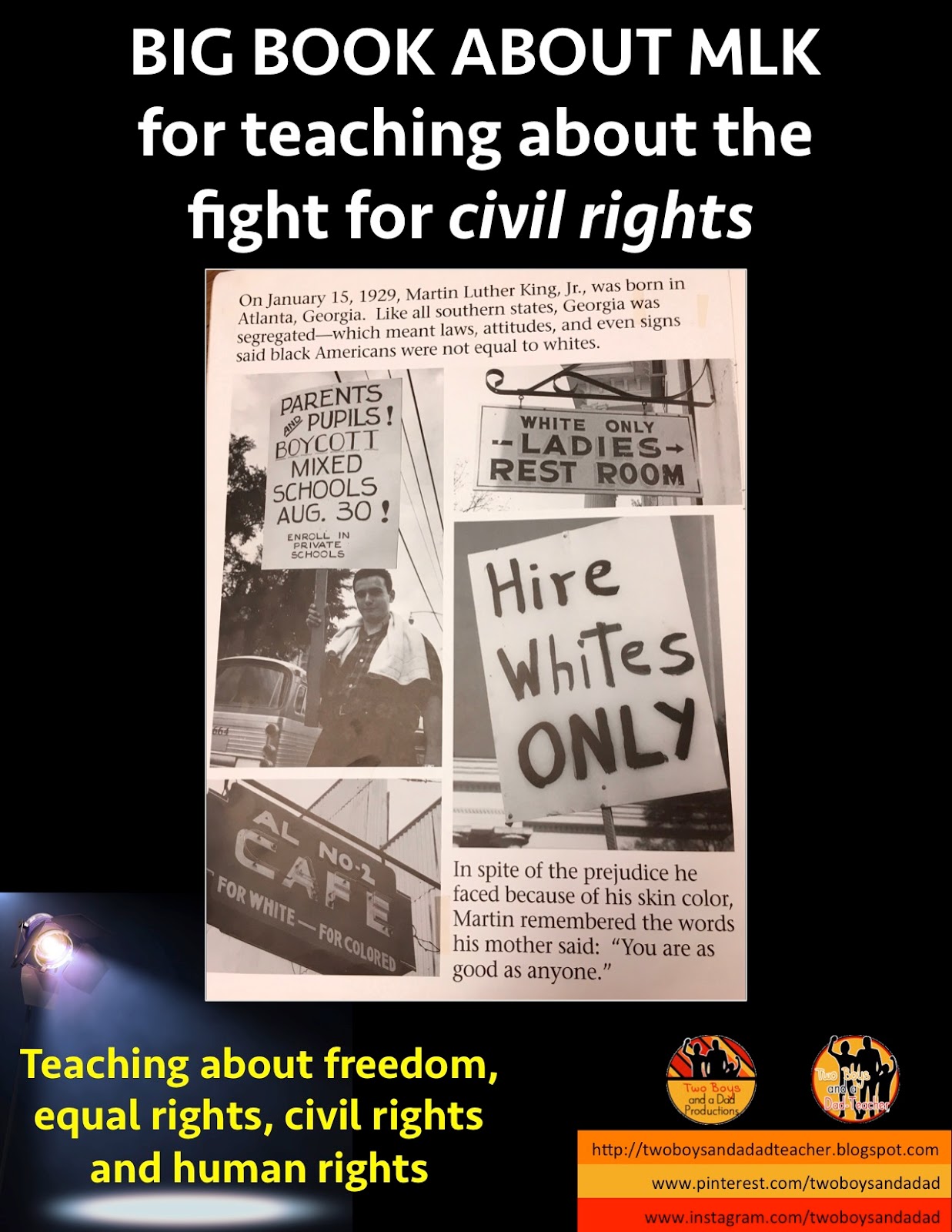 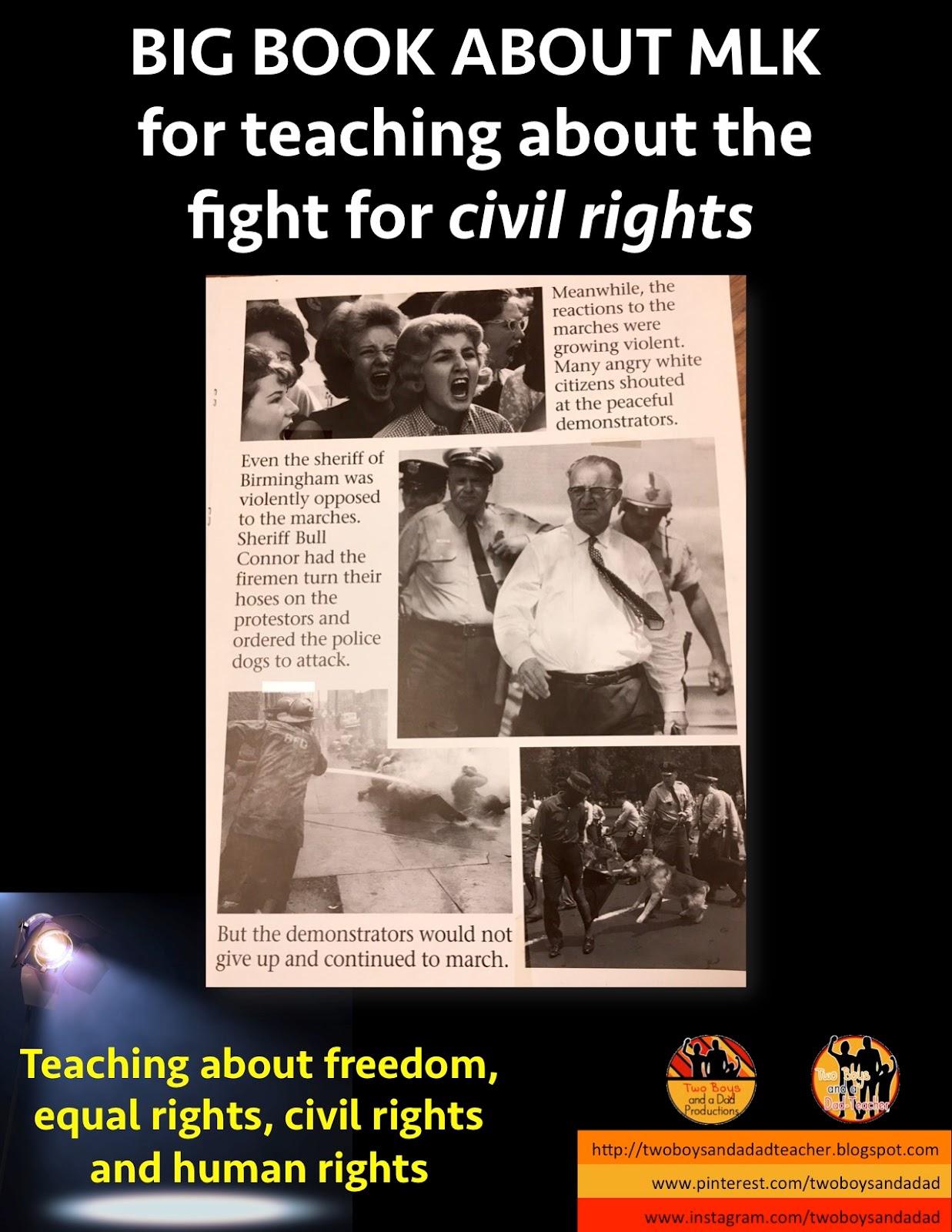 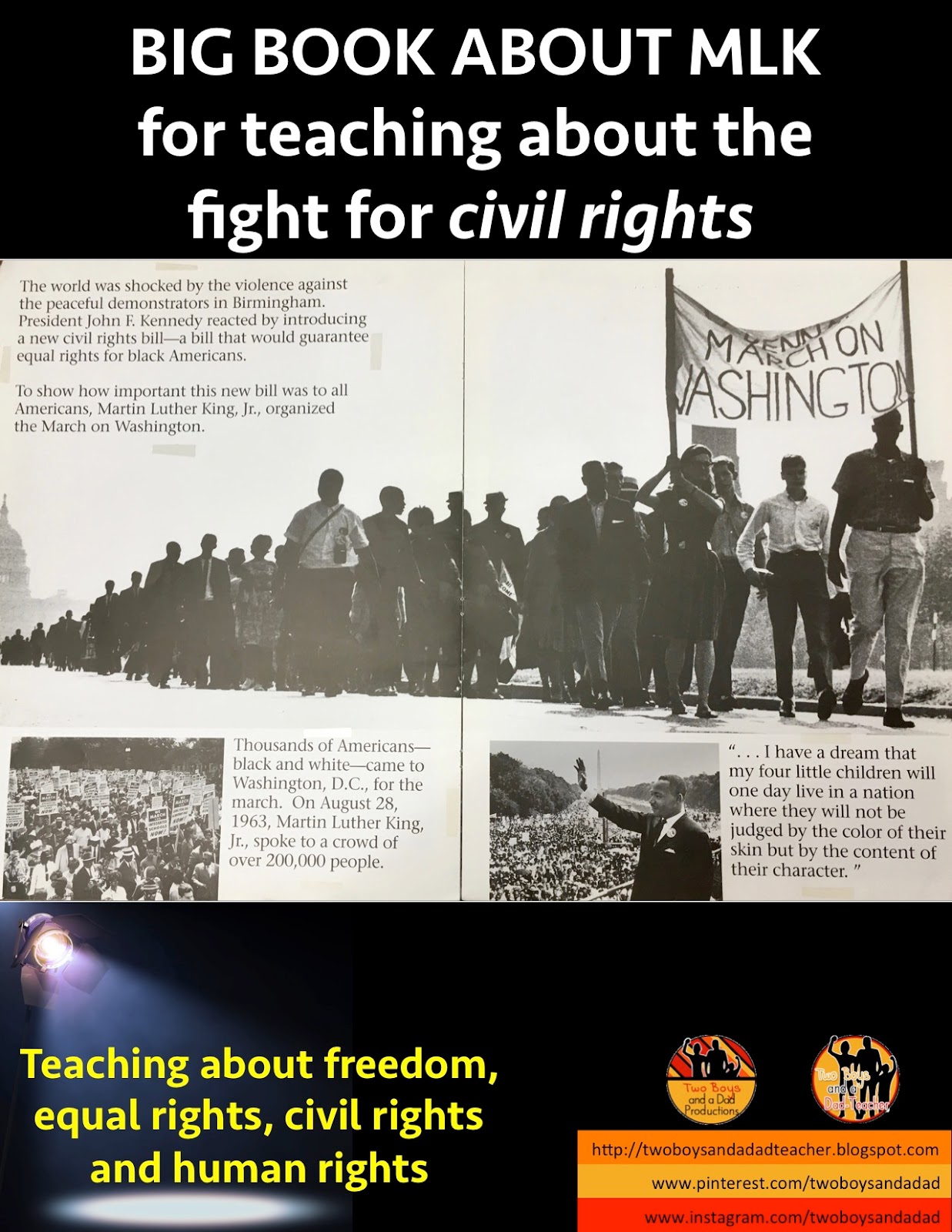 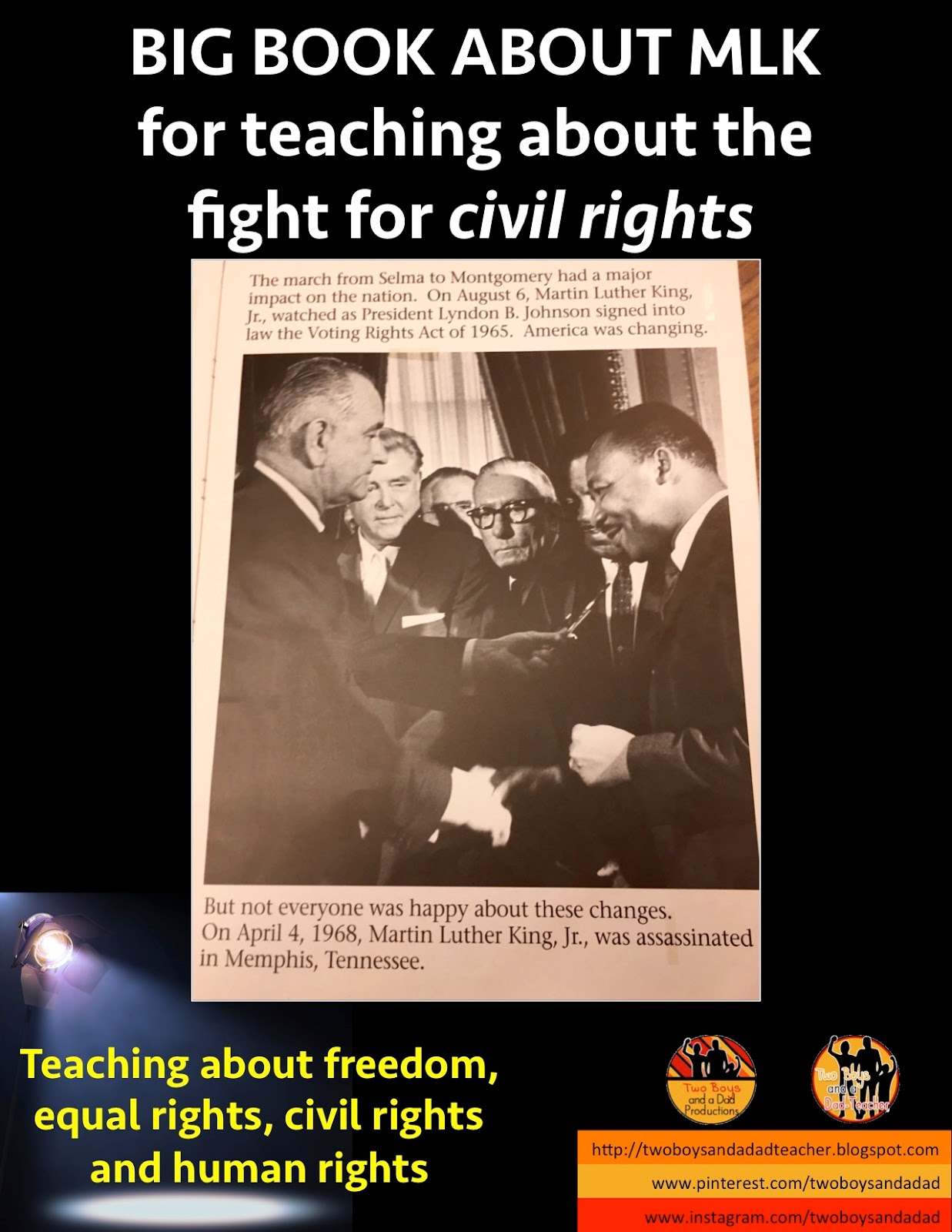 In the Digital Interactive Notebook, which I will feature in PART 2, I use many photographs of the era to show what segregation was like, including in the schools.

Another resource I use during this unit, is we watch the Disney movie Selma Lord Selma which is unrated and suitable for grade 3 and up.  I taught my students about all the tools the Civil Rights movement used:  boycotts, strikes, marches, protests, sit-ins, freedom rides, speeches, vigils, etc.  The tools would be used for the next wave of correcting injustices, the Human Rights Movement.

I begin the unit by telling my students about a time when I was a kid going to a grocery store.  In front of the store were these people holding up signs that said:   BOYCOTT GRAPES.  I had no idea what that was about.  But I do know we didn’t buy grapes.  Of course, we are talking about the California Grape Boycott of the 60s lead by Cesar Chavez.

Theses are some of the stories I use for this unit: 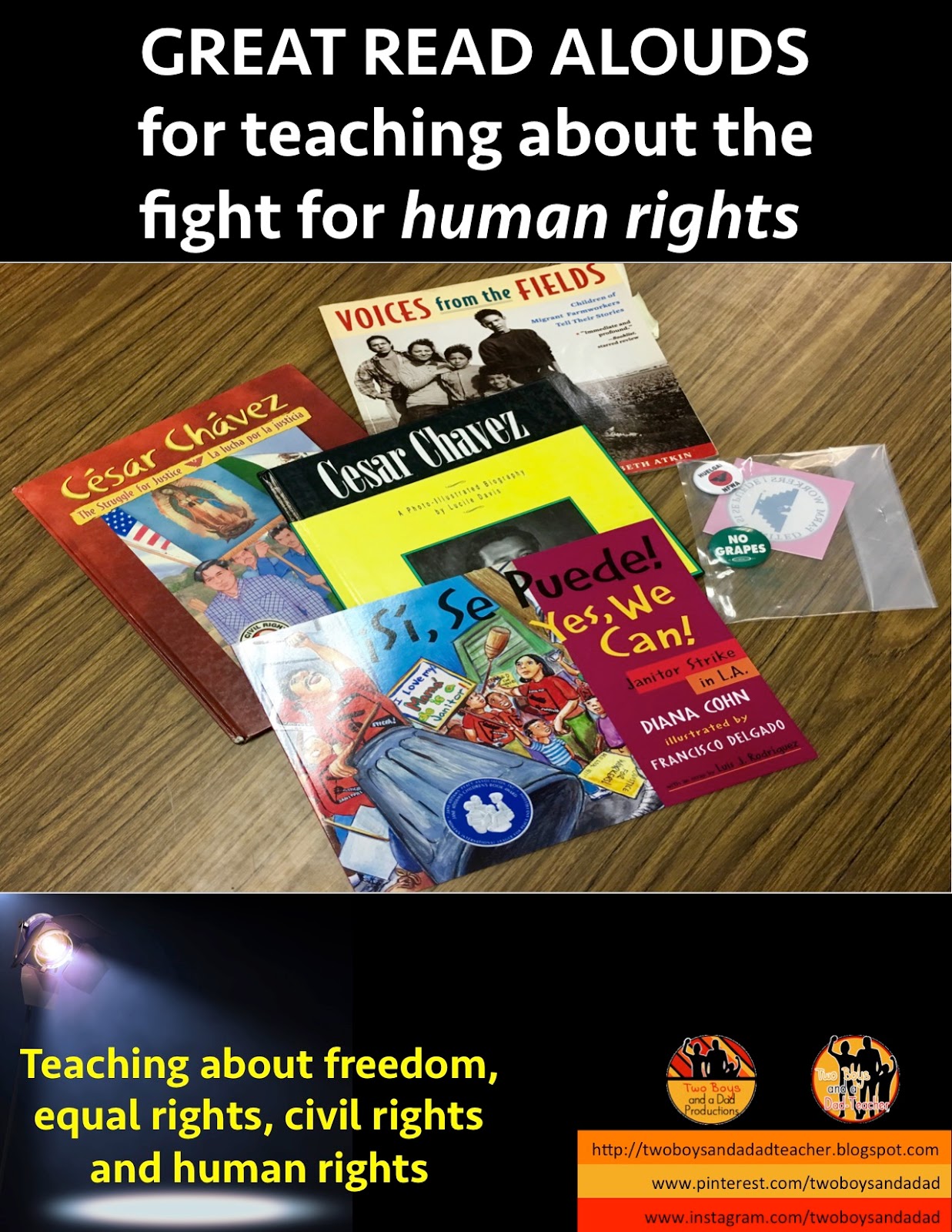 The one I really enjoy using is ¡Sí, se Puede! Yes, We Can! Janitor Strike in L.A. by Diana Cohn.  It is the true story of janitors who work in the tall office buildings of downtown Los Angeles cleaning offices.  They went on strike for better working conditions and better pay in 2000, not so long ago.  I try to show the students that we always have to fight to keep our rights and expand our rights.  We can never take them for granted.  Even today, we still have not completely changed the backward thinking of some.   So I tell my students that it is up to them to continue the fight so that there is JUSTICE for all and EQUALITY for all.

Finally, if you’re looking of more resources for teaching Social Studies, you might want to consider following my Social Studies Pinterest Board that’s full of great ideas, resources, tips and everything else social studies. 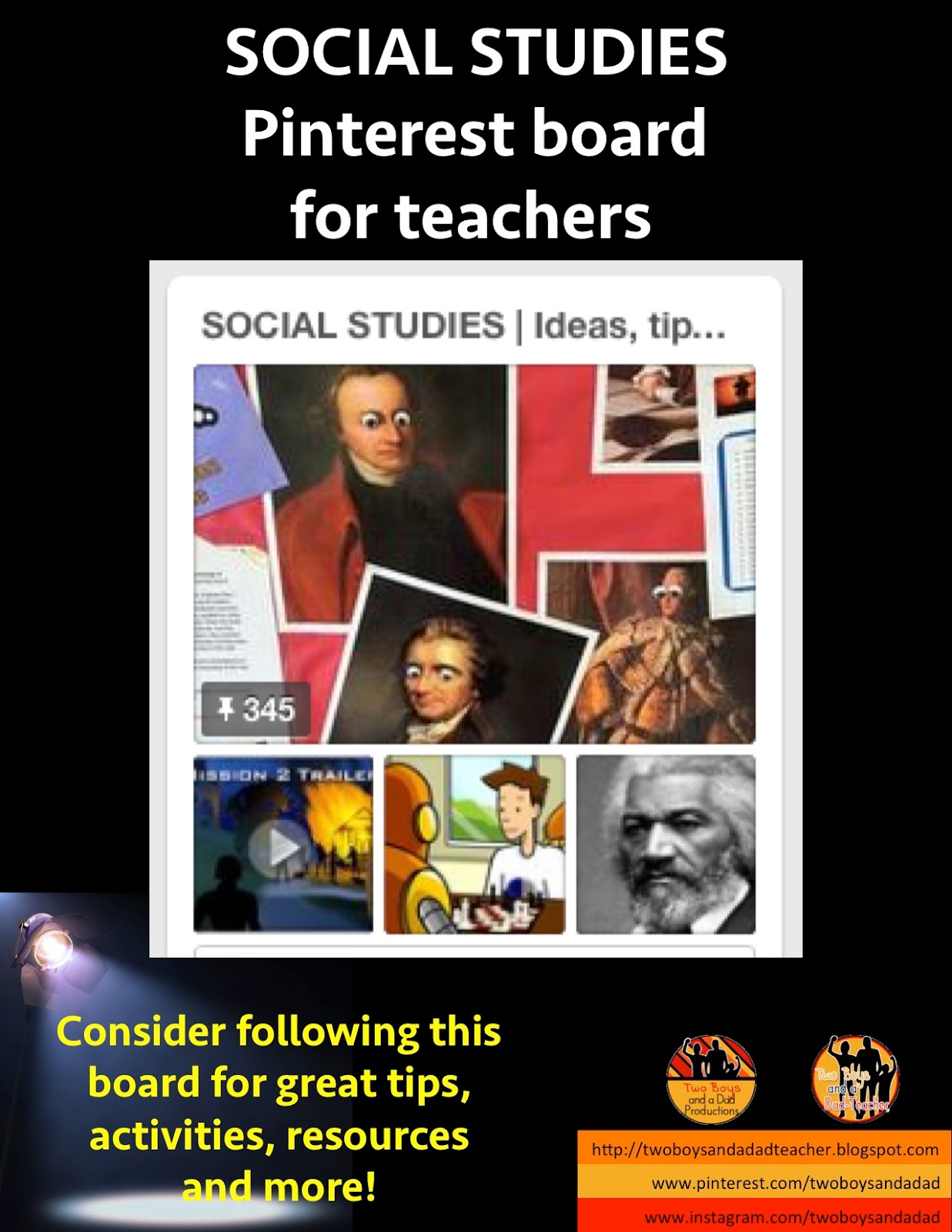 In PART 2, you will see how I’ve incorporated Digital Interactive Notebooks using Google Slides for all these units.